Aisling Swindell was paying so much for rent last year—$2,100 per month to live in a studio in Downtown LA—she figured she might as well buy a place.

“The house I ended up buying was $440,000, which is insane, right?” says Swindell, who works for an online fashion company.

That price tag, which is $178,000 below the median in LA County, sounds unbelievable, especially for what it bought her: 870 square feet in the city, plus a little yard, lots of natural light, some stylish updates, and charming, 1930s-era details, like wainscoting and solid wood doors.

But while she’s no longer a renter, she still doesn’t, technically, own a house.

Her $440,000 bought her a share of a larger property: a triplex on an 8,344-square-foot lot in Jefferson Park. Her right to occupy the unit, and her responsibility for maintaining it, are spelled out in a contract with her neighbors, who live in the triplex and, with her, are its joint owners.

The ownership model, called tenancy in common, or TIC, is not totally new to California. But the rise in the use of the model could change the Los Angeles housing market—for better, and worse.

Because TIC units tend to be priced about 10 to 20 percent below comparable condos, where buyers actually own the individual units, the real estate agents who have pioneered the model in Los Angeles herald it as a way for first-time homebuyers to break into one of the nation’s most unaffordable cities.

“It’s cracking open how we’re thinking about owning property,” says Liz McDonald, founder of The Rental Girl, a brokerage based in Highland Park. “Renters are getting priced out of homeownership.”

McDonald, who worked with renters for more than 15 years, almost single-handedly brought tenancy in common to Los Angeles, along with San Francisco’s Sterling Bank and Trust, which is the only bank making tenancy in common loans in LA today.

Sterling has started lending money to developers in Los Angeles to convert rentals into TIC properties, and it now offers fractional loans to individual buyers, so they don’t have to go in together as a group to get one shared loan for a property.

“We’ve been talking about financing TICs in LA for over a decade,” says Sterling’s Henry Jeanes, who specializes in tenancy in common lending. “We’re now fully committed to jumping in and expanding.”

Developers and investors have flipped more than a dozen multifamily buildings in Los Angeles over the last nine months. Since November, The Rental Girl has sold 50 TIC units.

Two other brokers, Christopher Stanley and Ali Jack, are also dabbling in TICs, and along with The Rental Girl, have a combined six TIC properties for sale. A bright two-bedroom bungalow in Glassell Park is listed at $549,000. A three-bedroom with an updated kitchen in a Silver Lake fourplex is listed at $799,000.

“The first time you see one of Liz’s listings, you’re like, ‘Oh, wow, that looks really great,’” says Sheldon Candis, a writer and director who closed in June on a 1920s Spanish-style TIC in Elysian Heights. “Then it takes you back, because the price seems too good to be true.” In some ways, it is. 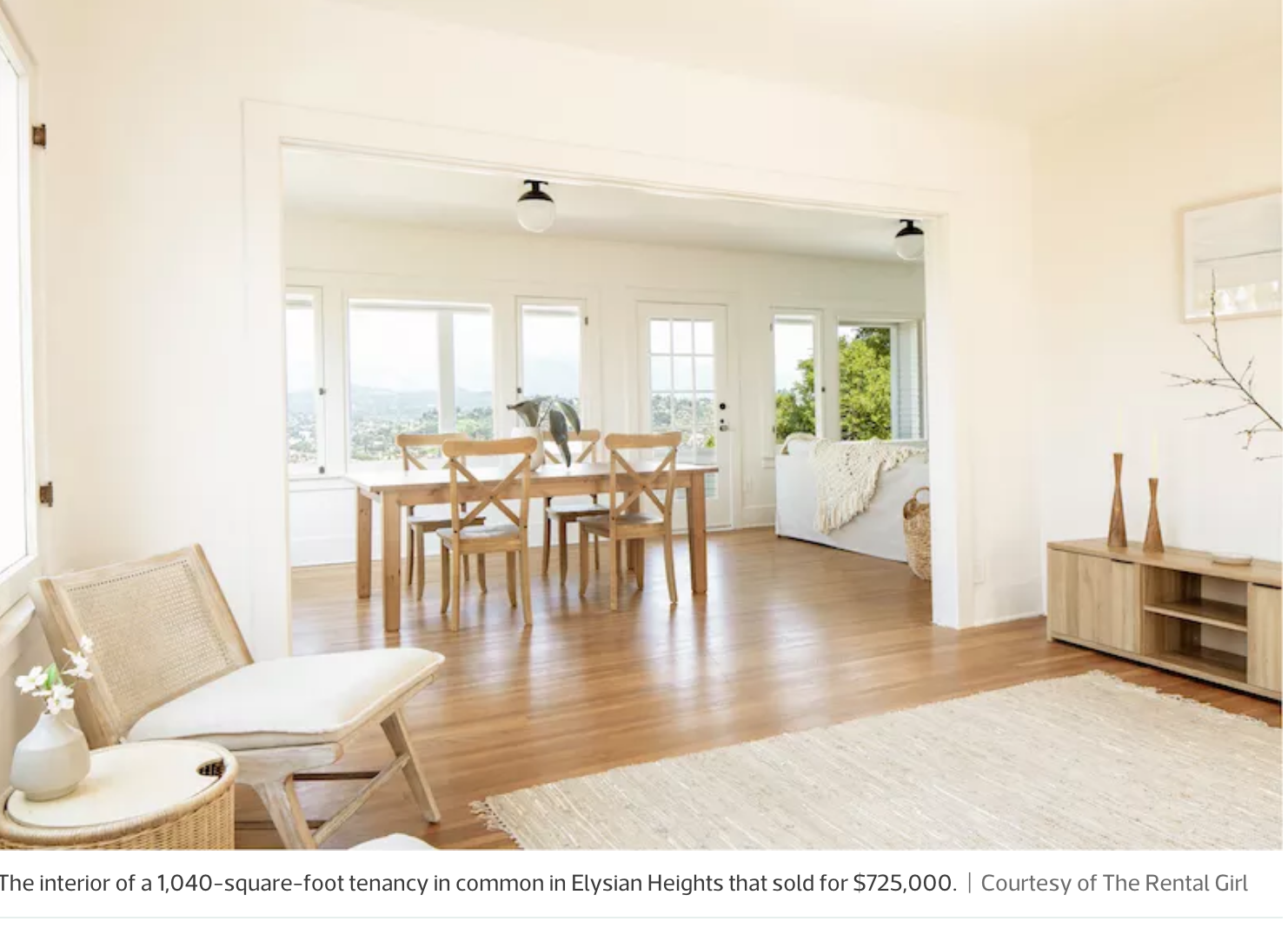 All of the TICs that have sold or are for sale in Los Angeles have been converted from older rent-controlled apartment buildings and bungalow courts. It’s difficult to track, but it’s very likely that many of them once housed renters who had to be evicted in order to put the properties up for sale.

The Los Angeles Tenants Union has protested outside The Rental Girl’s office on York Boulevard, and built a website to document stories of renters who have been evicted or are facing eviction because of tenancy in common.

Its members believe housing is a human right, and that what the brokers promoting TICs are doing is forcing out longtime LA residents.

The Rental Girl, on the other hand, says it’s helping renters who have the means to afford a down payment, but who would otherwise be shut out of homeownership because of high home prices, accrue wealth.

Cristina Brow, a real estate agent and McDonald’s partner, says housing as a human right is a fantasy. It’s a commodity to be purchased, she says, with “winners and losers,” though she says she hopes tenants facing eviction are leveraging “the shit out of” the Ellis Act. (The state law guarantees renters cash payments when they’re booted from a rent-controlled building.)

Since 2001, property owners have filed applications with the city of Los Angeles to pull 25,853 rent-controlled units from the housing market, according to the Coalition for Economic Survival. That’s putting a dent in the number of units that renters can actually afford.

“Tenants are going to be relocated for sure. There’s no way to sugar coat that,” Brow says. “We challenge ourselves on this topic every day, every week. We do that mental check: ‘What’s our goal?’ I hope we’re making a better opportunity for people.”

But even for buyers who find themselves aligned with The Rental Girl’s view on real estate, TICs come with risks.

“The Rental Girl’s perspective, which is our perspective, is that all of these people renting in LA are kept renting and are not building any wealth,” says Chrissy Callan, who works in costume design for films.

Along with her husband, she purchased a TIC in Historic Filipinotown in November.

“Even while buying it, I was trying to wrap my head around it,” she says. It wasn’t so much the ethical considerations, because the building they bought into had sat empty for 10 years before it was purchased by an investor and flipped, she says.

It was more that tenancy in common was such an unusual concept, at least in LA. Her brother, an architect in San Francisco, where TICs have been around for more than a decade, explained to her that tenancy in common units tend to be priced lower than equivalent properties because cooperative ownership could affect resale value.

Disputes with neighbors are tricky enough when money isn’t involved. Collective ownership heightens those stakes. And with TICs still so new to Los Angeles, he warned Callan that the city could one day pass regulations that would make it tougher to recoup their investment.

“I always tell buyers: Nobody goes out looking for a TIC,” says Marco Carvajal, a real estate agent in San Francisco. “They walk into a place, fall in love, then find out it’s a TIC.”

Another complication is finding financing for a TIC, which is limited—and stricter than a conventional home loan.

Sterling is the only lender offering TIC mortgages in Los Angeles, and its requirements are stringent: Buyers must have a credit score of at least 700 and pay at least 10 percent upfront (on a $440,000 unit, for example, that means having $44,000 in the bank).

And Sterling only offers adjustable-rate mortgages, or ARMs, with interest rates that are not locked in. Its rates adjust after three, five, or seven years, depending on the loan.

It doesn’t offer traditional fixed-rate loans, because there’s not a secondary market for them, says Jeanes.

“They can’t be sold off and loaded off to Wall Street very easily,” he says. “The banks that package the loans are keeping them and taking the risk.”

Some potential buyers never get comfortable enough with the financing options to proceed. “For every two people who find a TIC they love, half will proceed,” Jeanes says.

Ultimately, Callan was swayed by what her money could get with a TIC.

“Anything else that was the right size was farther away or, more frequently, needed a lot of work,” she said. “You’d walk in and the floors, you’d feel like you were drunk, they had settled poorly, or there were weird layouts.”

So was Candis. “When I saw this place, a place in the hills that fit into my budget… for me, it truly was a godsend,” he says of his new home in Elysian Heights. Shared ownership allowed him to stay within his housing budget without leaving the area where he had rented.

“I’m thankful that my Trader Joe’s didn’t change,” he says.