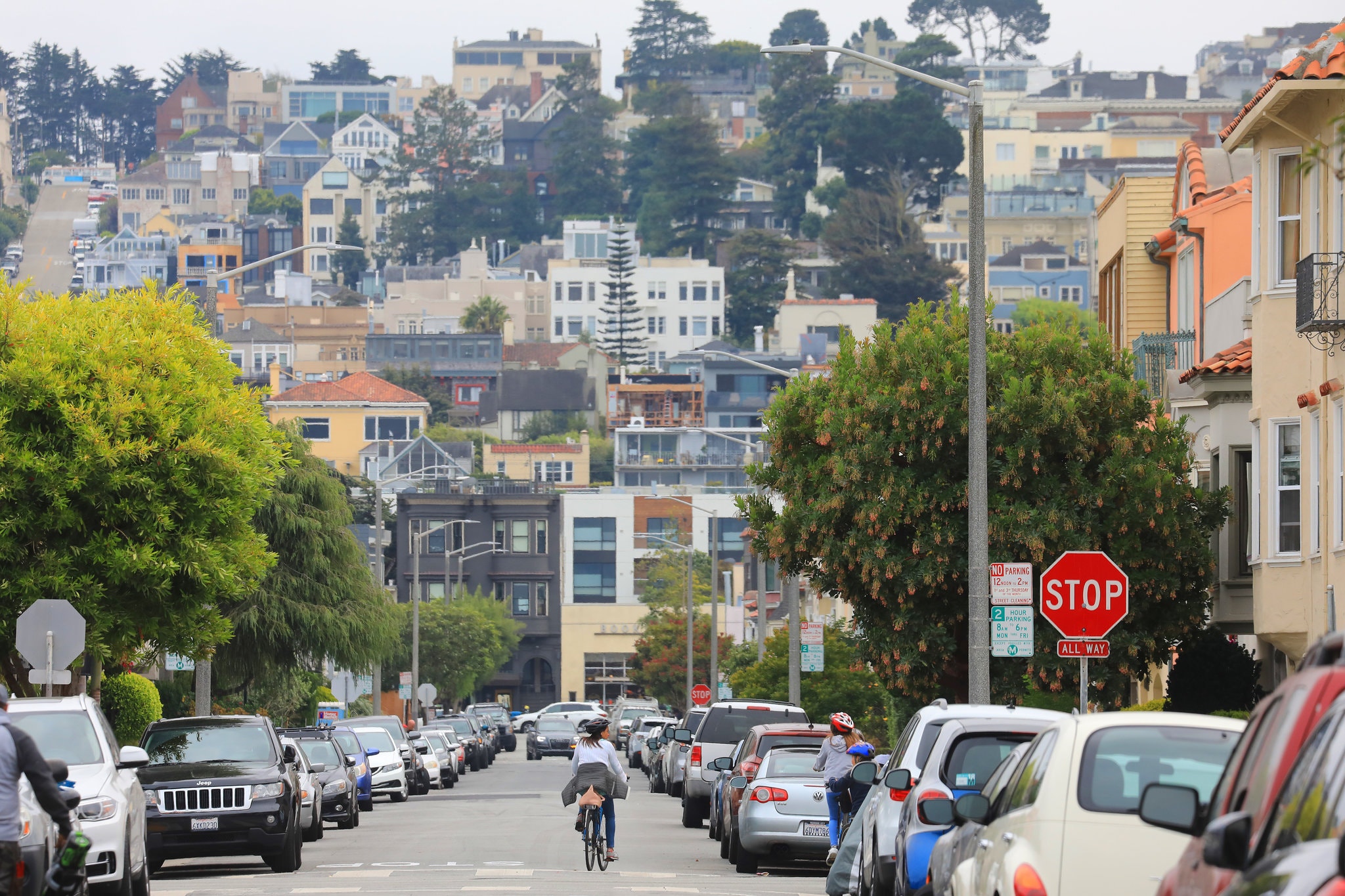 San Francisco has had rent control for decades, but it has not been spared from a housing squeeze and rising homelessness. A state law approved Wednesday aims to strengthen tenant protections.CreditCreditJim Wilson/The New York Times

California lawmakers approved a statewide rent cap on Wednesday covering millions of tenants, the biggest step yet in a surge of initiatives to address an affordable-housing crunch nationwide.

The bill limits annual rent increases to 5 percent after inflation and offers new barriers to eviction, providing a bit of housing security in a state with the nation’s highest housing prices and a swelling homeless population.

Gov. Gavin Newsom, a Democrat who has made tenant protection a priority in his first year in office, led negotiations to strengthen the legislation. He has said he would sign the bill, approved as part of a flurry of activity in the final week of the legislative session.

The measure, affecting an estimated eight million residents of rental homes and apartments, was heavily pushed by tenants’ groups. In an indication of how dire housing problems have become, it also garnered the support of the California Business Roundtable, representing leading employers, and was unopposed by the state’s biggest landlords’ group.

That dynamic reflected a momentous political swing. For a quarter-century, California law has sharply curbed the ability of localities to impose rent control. Now, the state itself has taken that step.

“The housing crisis is reaching every corner of America, where you’re seeing high home prices, high rents, evictions and homelessness that we’re all struggling to grapple with,” said Assemblyman David Chiu, a San Francisco Democrat who was the bill’s author. “Protecting tenants is a critical and obvious component of any strategy to address this.”

A greater share of households nationwide are renting than at any point in a half-century. But only four states — California, Maryland, New Jersey and New York — have localities with some type of rent control, along with the District of Columbia. A coalition of tenants’ organizations, propelled by rising housing costs and fears of displacement, is trying to change that. 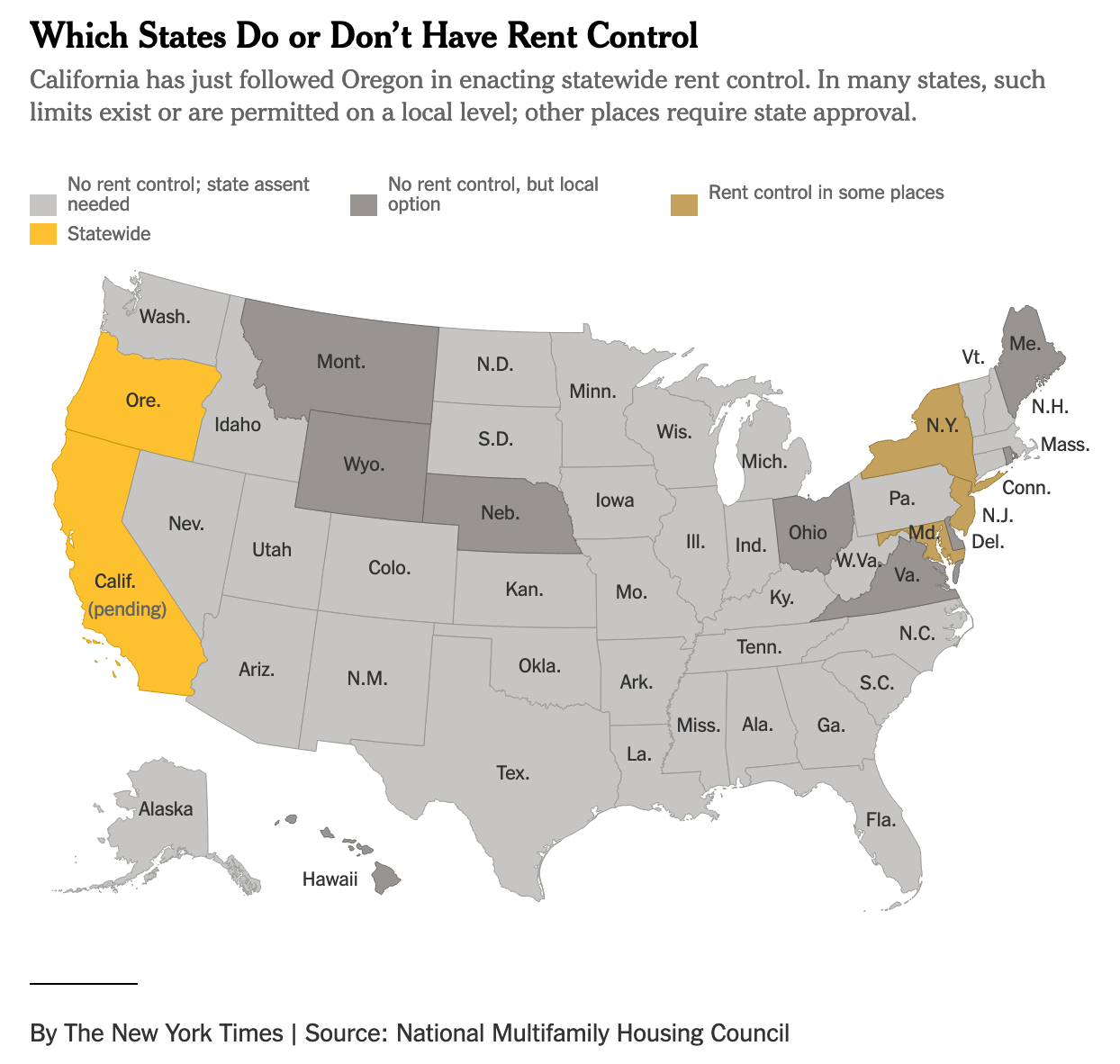 Moves to expand rent control through ballot initiatives or legislation have arisen since 2017 in about a dozen states, including Washington, Colorado and Nevada, according to the National Multifamily Housing Council, an apartment-industry trade group.

Measures were recently introduced in Massachusetts and Florida to allow rent regulation in cities with a housing crunch — like Boston, Miami and Orlando.

Nationally, about a quarter of tenants pay more than half their income in rent, according to the Joint Center for Housing Studies at Harvard University. And California’s challenges are particularly acute. After an adjustment for housing costs, it has the highest state poverty rate, 18.2 percent, about five percentage points above the national average, according to a Census Bureau report published Tuesday.

Homelessness has come to dominate the state’s political conversation and prompted voters to approve several multibillion-dollar programs to build shelters and subsidized housing with services for people coming off the streets.

That bleak picture — combined with three-hour commutes, cries for teacher housing and the sight of police officers sleeping in cars — is prompting legislators and organizers to propose ever more far-reaching steps.

State Senator Scott Wiener, a San Francisco Democrat, offered a bill that would essentially override local zoning to allow multiple-unit housing around transit stops and in suburbs where single-family homes are considered sacrosanct. The bill was shelved in its final committee hearing this year, but Mr. Wiener has vowed to keep pushing the idea.

Economists from both the left and the right have a well-established aversion to rent control, arguing that such policies ignore the message of rising prices, which is to build more housing. Studies in San Francisco and elsewhere show that price caps often prompt landlords to abandon the rental business by converting their units to owner-occupied homes. And since rent controls typically have no income threshold, they have been faulted for benefiting high-income tenants.

“Rent control is definitely having a moment across the country,” said Jim Lapides, a vice president at the National Multifamily Housing Council, which opposes such restrictions. “But we’re seeing folks turn to really shortsighted policy that will end up making the very problem worse.”

But many of the same studies show that rent-control policies have been effective at shielding tenants from evictions and sudden rent increases, particularly the lower-income and older tenants who are at a high risk of becoming homeless. Also, many of the newer policies — which supporters prefer to call rent caps — are considerably less stringent than those in effect in places like New York and San Francisco for decades.

“Caps on rent increases, like the one proposed in California or the one recently passed in Oregon, are part of a new generation of rent-regulation policies that are trying to thread the needle by offering some form of protection against egregious rent hikes for vulnerable renters without stymieing much-needed new housing construction,” said Elizabeth Kneebone, research director at the Terner Center for Housing Innovation at the University of California.

Mr. Chiu’s bill is technically an anti-gouging provision, with a 10-year limit, modeled on the typically short-term price caps instituted after disasters like floods and fires. It exempts dwellings less than 15 years old, to avoid discouraging construction, as well as most single-family homes. But it covers tenants of corporations like Invitation Homes, which built nationwide rental portfolios encompassing tens of thousands of properties that had been lost to foreclosure after the housing bust a decade ago.

According to the online real-estate marketplace Zillow, only about 7 percent of the California properties listed last year saw rent increases larger than allowed under the bill. But there could be a big effect in rapidly gentrifying neighborhoods like Boyle Heights in Los Angeles, where typical rents on apartments not covered by the city’s rent regulations have jumped more than 40 percent since 2016.

By limiting the steepest and most abrupt rent increases, the bill is also likely to reduce the incentive for hedge funds and other investors to buy buildings where they see a prospective payoff in replacing working-class occupants with tenants paying higher rents.

Sandra Zamora, a 27-year-old preschool teacher, lives in a one-bedroom apartment in Menlo Park, Calif., a short drive from Facebook’s expanding headquarters. A year ago, Ms. Zamora’s building got a new owner, and the rent jumped to $1,900 from $1,100, a rise of over 70 percent. Most of her neighbors left. Ms. Zamora stayed, adding a roommate to the 600-square-foot space and taking a weekend job as a barista.

“Having an $800 increase at once was really shocking,” she said. “It just keeps me thinking every month: ‘O.K., when is it going to happen? How much am I going to get increased the next month?’ It’s just a constant worry.”

Even as more states begin to experiment with rent control, it has long existed in places like New York City, which intervened to address a housing shortage post-World War II, and San Francisco, where it was adopted in 1979.

Today it is common in many towns across New Jersey and in several cities in California, including Berkeley and Oakland, although the form differs by jurisdiction. Regulated apartments in New York City are mostly subject to rent caps even after a change in tenants, for example, while rent control in the Bay Area has no such provision.

In New York City, where almost half of the rental stock is regulated, a board determines the maximum rent increases each year; this year it approved a 1.5 percent cap on one-year leases, considerably lower than the limits passed in Oregon and California.

Cea Weaver, campaign coordinator of Housing Justice for All, a coalition of New York tenants that pushed for new rent laws, welcomed the outcome in California.

“Any victory helps to build a groundswell,” she said. “There is a younger generation of people who see themselves as permanent renters, and they’re demanding that our public policy catches up to that economic reality.”

A version of this article appears in print on Sept. 12, 2019, Section A, Page 16 of the New York edition with the headline: California Passes Statewide Rent Control in Effort to Ease Housing Crisis

By Conor Dougherty and Luis Ferré-Sadurní