In some popular U.S. cities, such as San Francisco, the median home value is well over $1 million. But in the scenic Italian town of Sambuca, located in western Sicily, you can buy a home for one euro, or about $1.15.

Residents have fled to larger cities in recent years, and local officials have come up with a plan to sell dozens of homes for virtually nothing in the hope of repopulating and reviving the rural town. The properties range in size from about 430- to 1,610 square feet, so they're on the small side, but most come with private grotto access.

There is a catch, though: If you purchase one of the houses, you must invest €15,000 ($17,100 USD) in renovations over the course of three years, since many of the properties were abandoned and are cluttered with broken stones and old furniture. You must also put down a security deposit of €5,000 ($5,700 USD).

Sambuca, also known as the City of Splendor, was a nominee in 2016 Italy's Most Beautiful Towns contest.

"This fertile patch of land is dubbed the Earthly Paradise. We're located inside a natural reserve, packed with history. Gorgeous beaches, woods and mountains surround us. It's silent and peaceful, an idyllic retreat for a detox stay," Giuseppe Cacioppo, Sambuca's deputy mayor and tourist councilor, tells CNN.

Walking the streets you'll find a mesh of baroque and Arab architectural styles. Tour guides can lead you through the "sunken city," a labyrinth of underground sandstone passageways. Just watch out for ghosts. It's rumored that spirits of slaughtered Saracen soldiers haunt the caves at night.

There haven't been any official sightings reported yet, CNN notes. 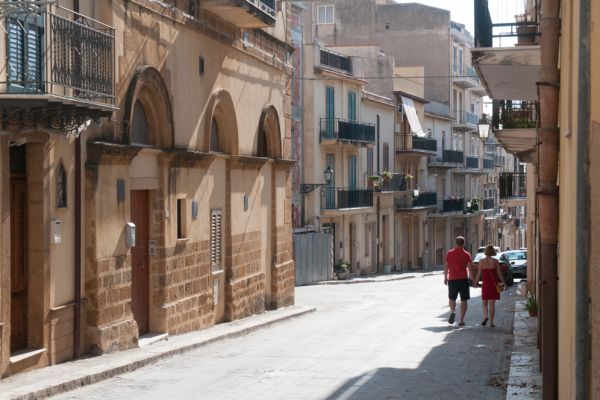 A view of the village of Sambuca di Sicilia, Italy.

Sambuca is not the first place to try and jolt the local economy by offering housing at bargain-basement prices.

Detroit, Michigan, has tried to fill run-down homes this way. Gary, Indiana, recently introduced its Dollar House Program. Officials there used a lottery system to offer home ownership to those who otherwise wouldn't be able to afford it.

And other Italian towns facing depopulation crises have launched similar initiatives. Last year the Sardinian town of Ollolai announced a plan to sell 200 homes for €1 each. And in 2017 the town of Candela in Puglia announced a plan to actually pay people to move there.

If you're interested in taking advantage of the offer in Sambuca, you better act fast.

"Some 10 houses have already been sold," Cacioppo says. "Dozens of others are available but badly in need of a makeover. We've been contacted by people from Switzerland, France and Spain and are receiving many requests."

Print Details
Previous post
Next post
The best place to buy a home in California is not San Francisco or San Jose
Do You Know How Much Your Home Has Increased in Value?