WE’RE IN THE GOLDEN AGE OF THE MAP, thanks to the fact that the internet has made them both easy to make and easy to find data for. So once a month, we do a round-up of some of the coolest maps out on the internet to give you a glimpse into the world around you works. Maps below aside, we also found this excellent CityLab article of how to become map literate. Part of the curse of having a world where map-making is easy is that many maps are actually shoddy, and thus the data can’t be trusted.

CityLab’s advice will be familiar to those who have spent plenty of time around maps, but they are still important points to drive home nonetheless. Always, they say, “check the source,” “be wary of the title,” “why did the mapmaker choose to display it in this.” For an example for that last bit of advice, always look twice at a map that switches suddenly between cool colors to hot colors. Red is almost always considered bad in map world, but is the red area that hugely different from the much less threatening blue area? Give CityLab’s piece a read, and with their tips in mind, check out this month’s coolest maps.

The name of the European country in the local language For those who want to be good guests. Via Reddit 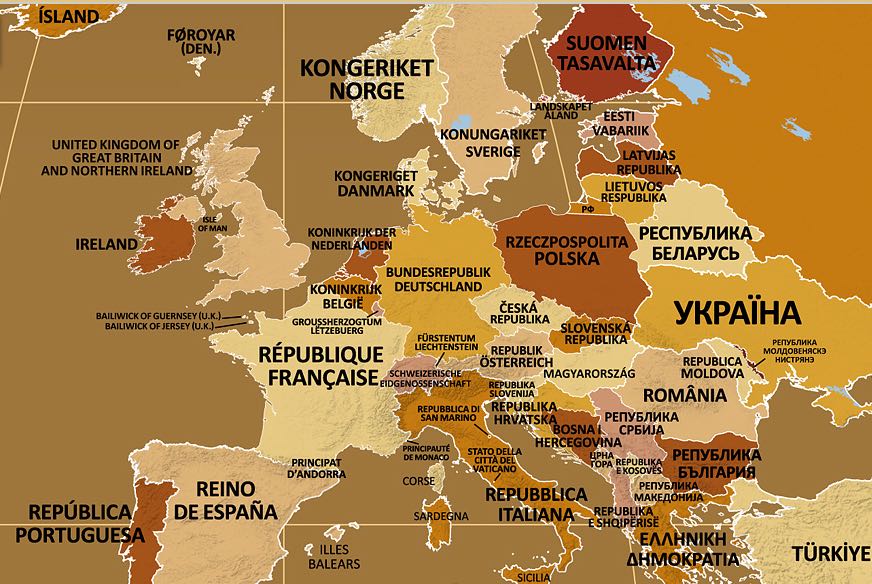 Countries that fought on the same side as the U.S. in at least one war. The differing shades of blue don't mean anything, they simply distinguish the separate countries. Via Reddit 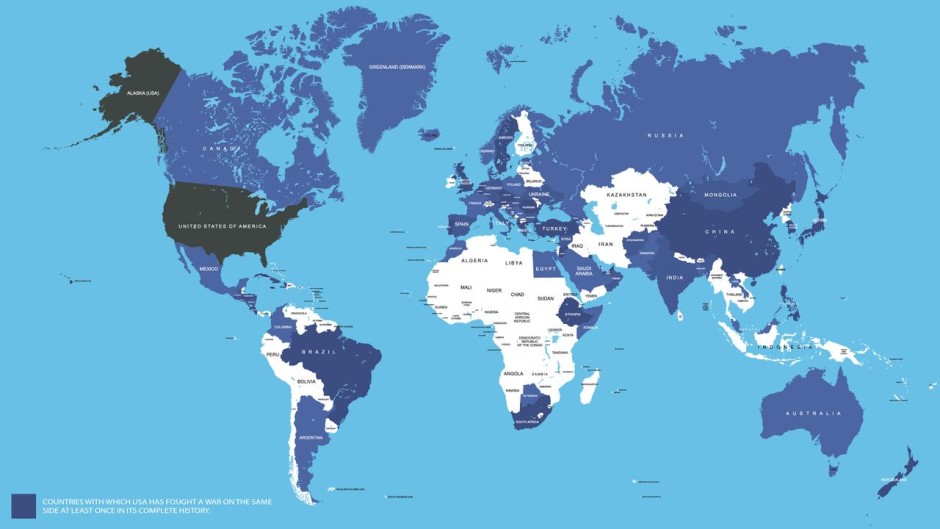 Countries the U.S. has fought against in at least one war Via Reddit 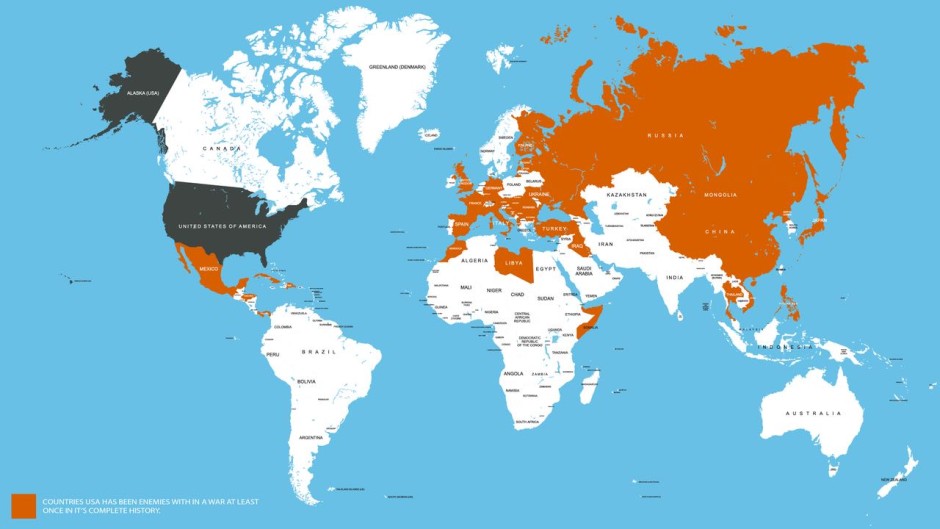 Countries Russia has fought in at least one war in their history. Via Reddit 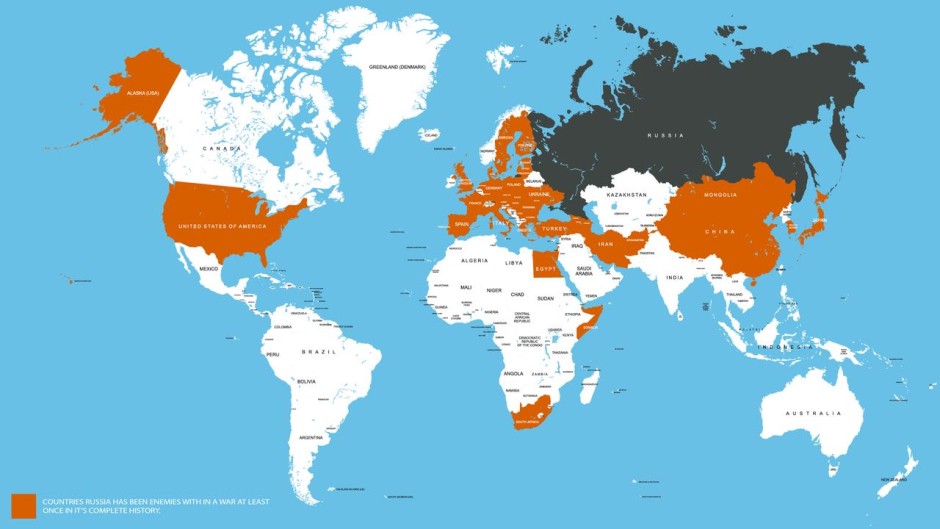 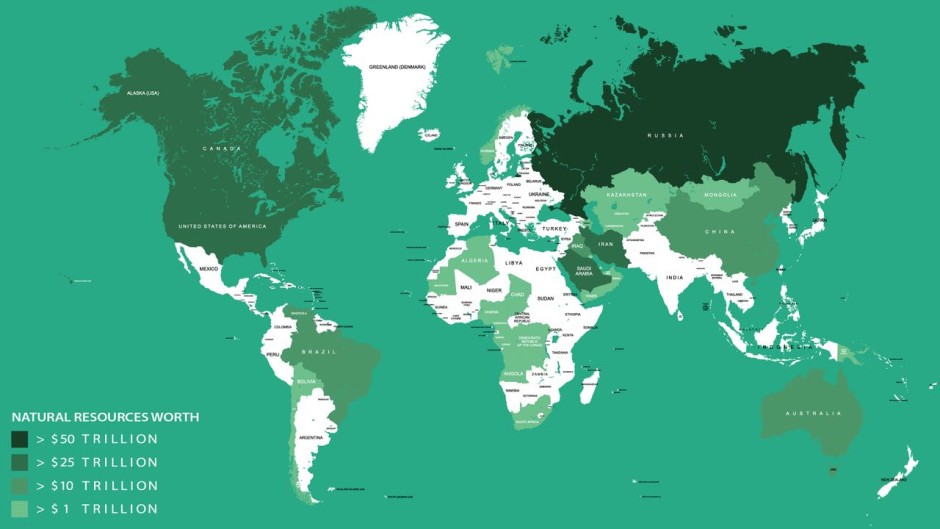 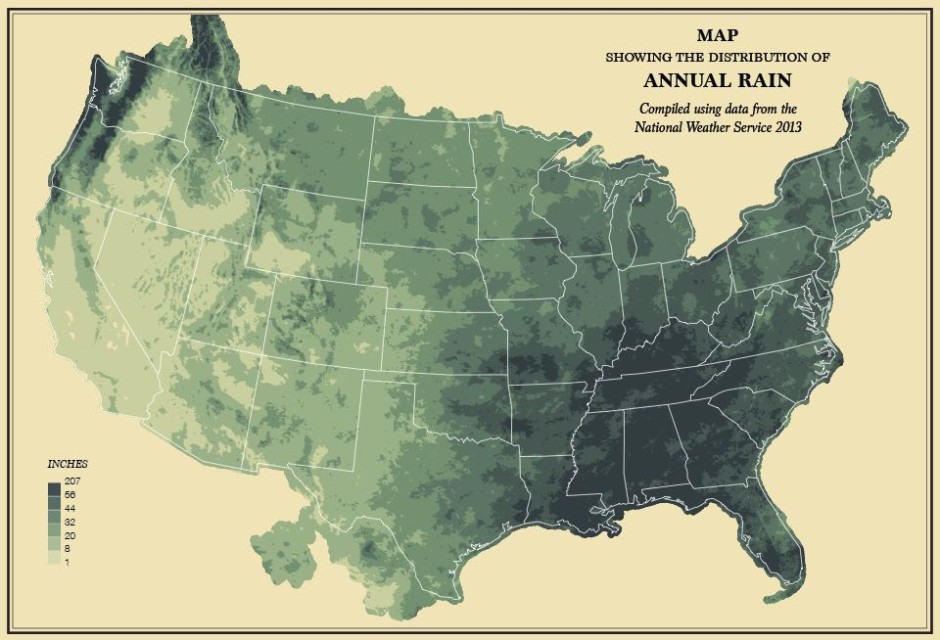 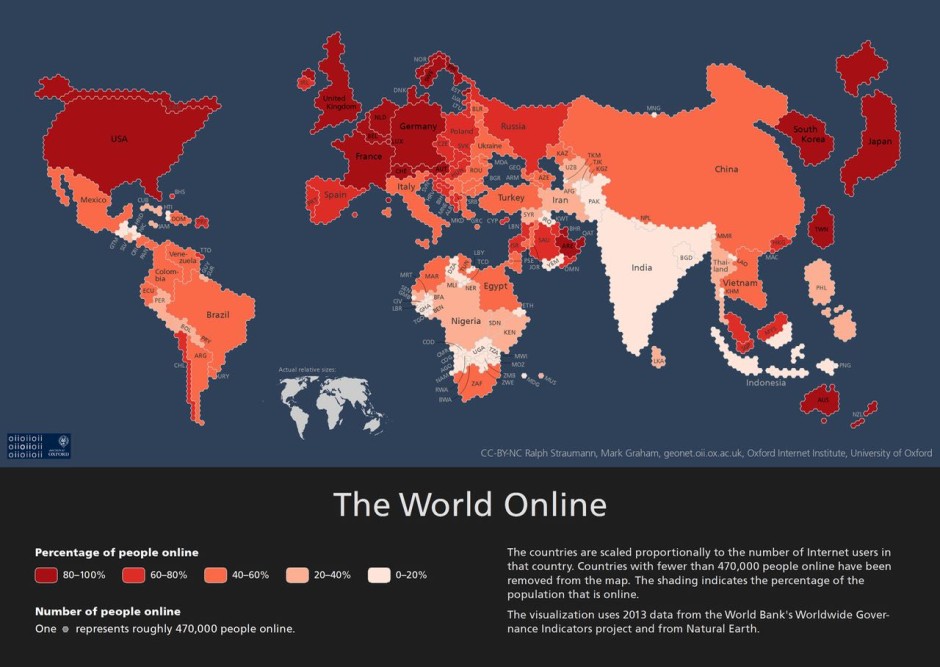 The most popular American fast food in each European country. One area in which Kazakhstan is ahead of all European countries: they love KFC. Via Reddit 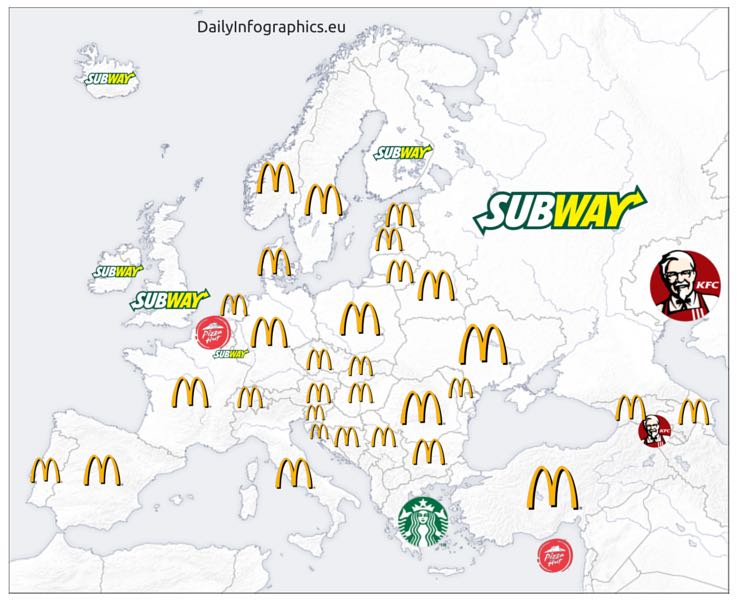 The most popular summer destinations by state. America LOVES Las Vegas. Via Kayak

Where the Legal Permanent Residents of the US come from. By state. This is a more specific qualification than immigrants as a whole. Via Reddit 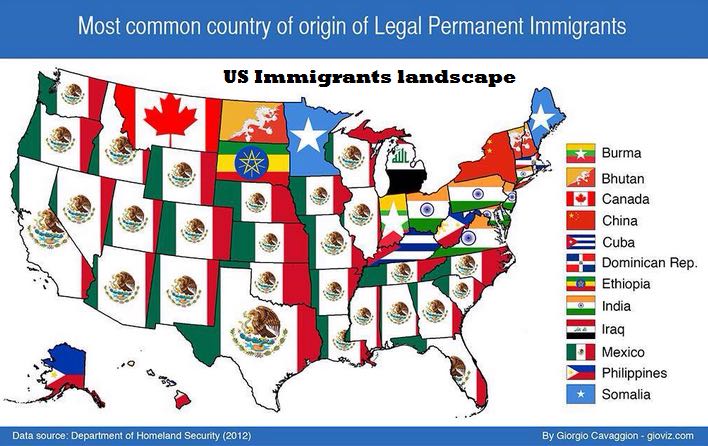 Where the risks of water conflict are. Larger version available here. Via Reddit 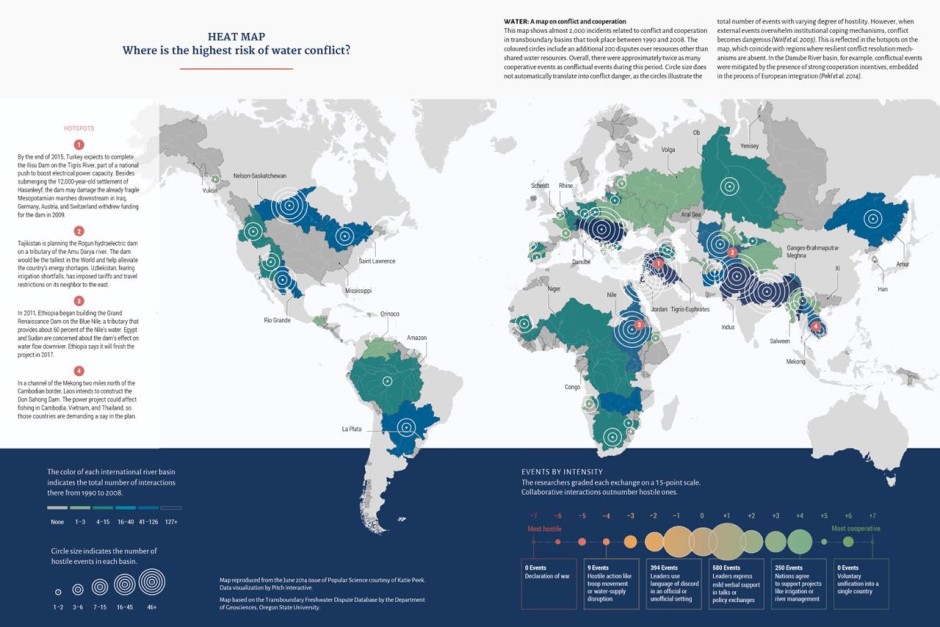 What are the drunkest states in the union? 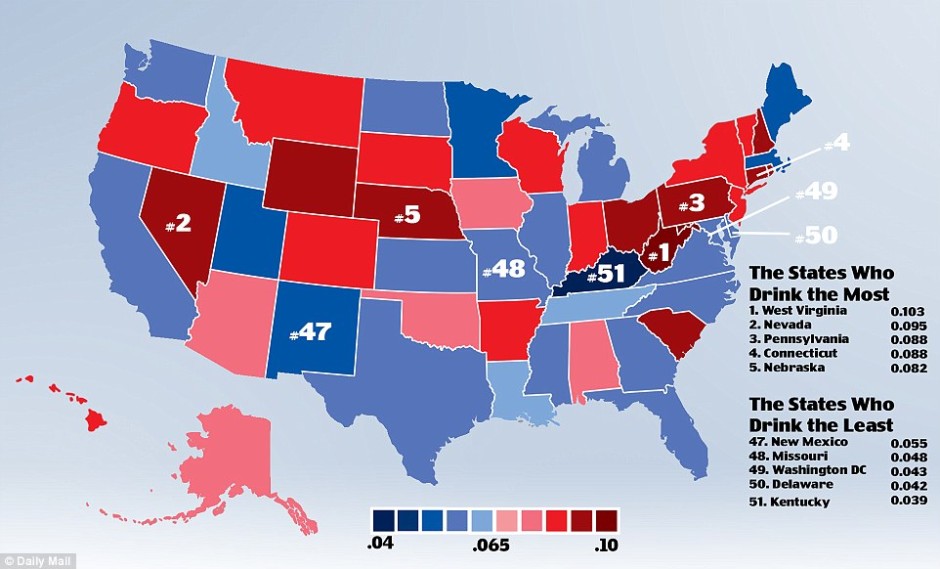 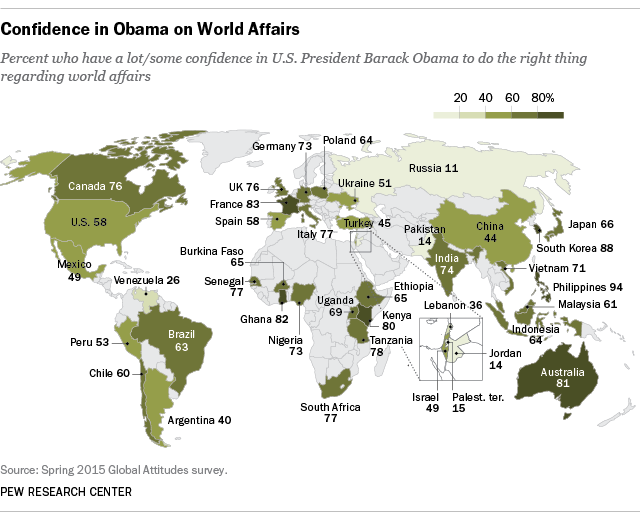 What other world leaders President Obama has called in 2015. It's clear who's most on his mind. Via Reddit 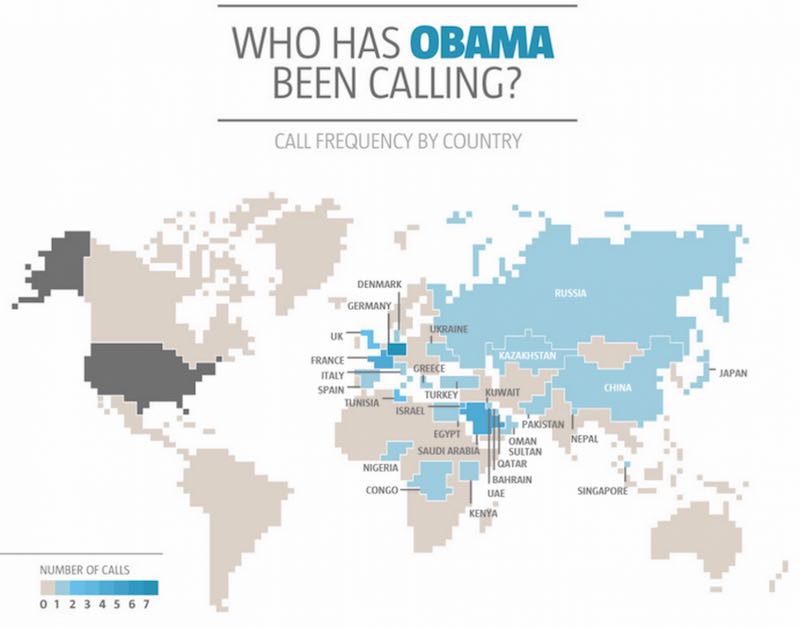 The most and least visited countries by UK adults 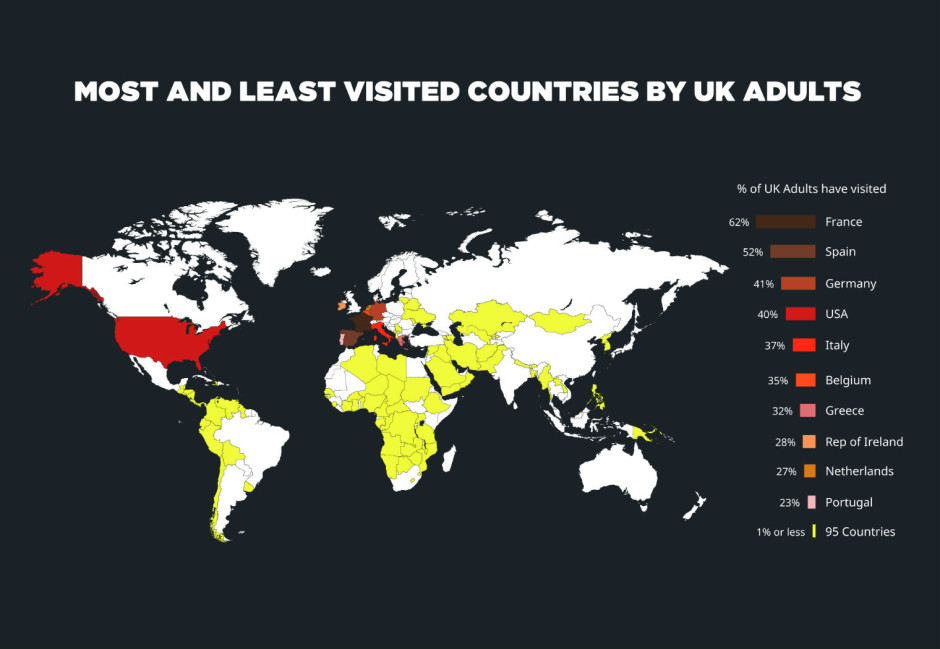 Which side of the road do people drive on? The handedness of traffic in each country. Via Wikipedia 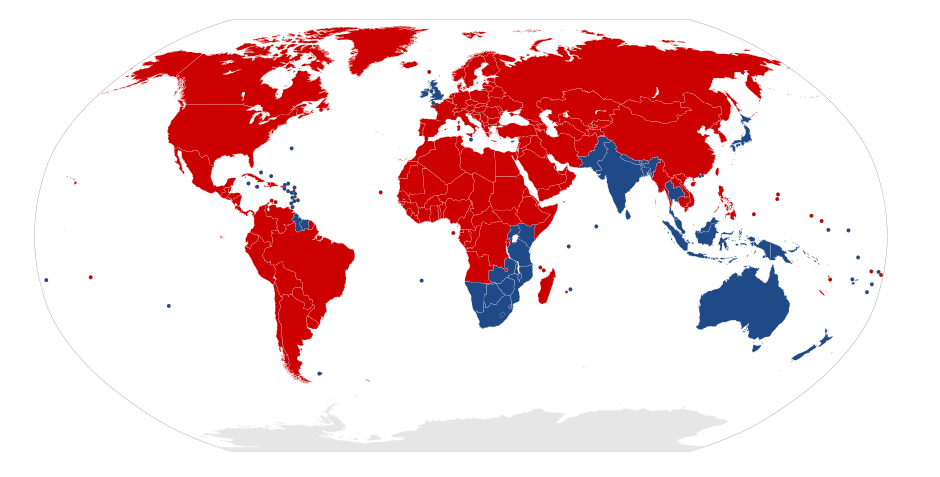 Where the college grads are. By county. Via Reddit 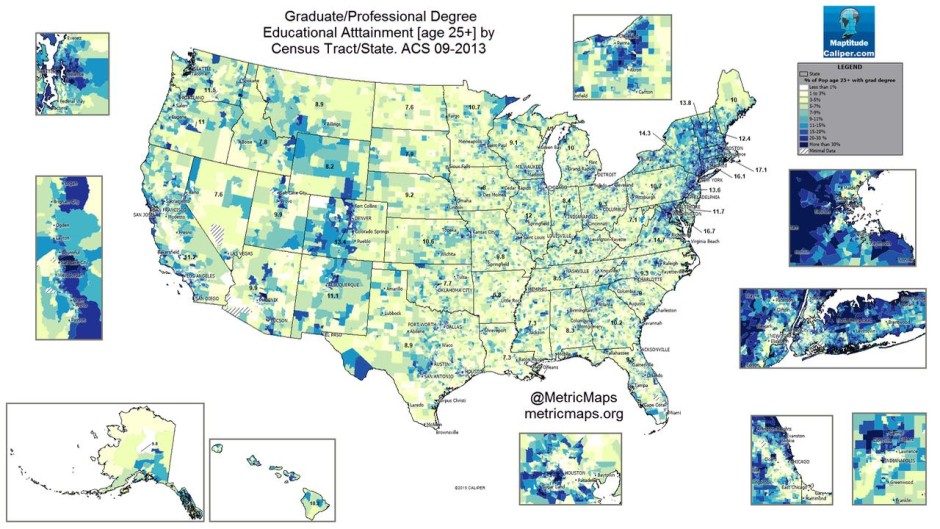 The percentage of the population in poverty. Many of the red spots in the U.S. are Native American reservations. Via Reddit 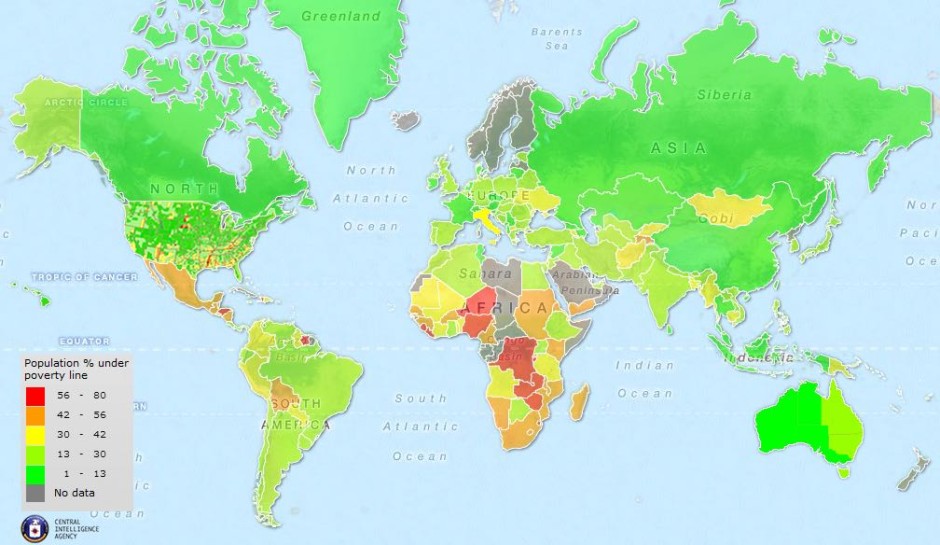 The most recurrent words on Wikipedia

The largest ancestral group by county in the US 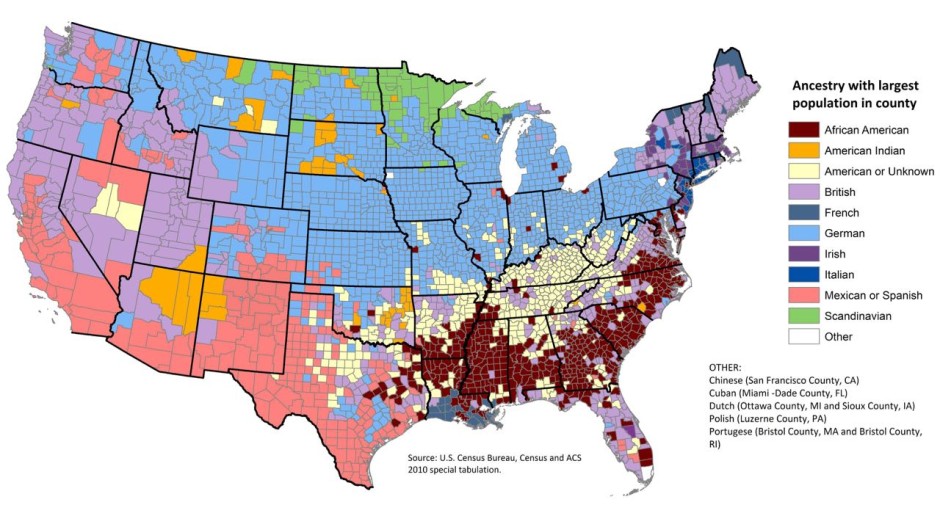 How old is your flag? This is according to when the most recent change to the flag was -- so for the United States, it would be when the star was added for Hawaii in 1959. Via Reddit 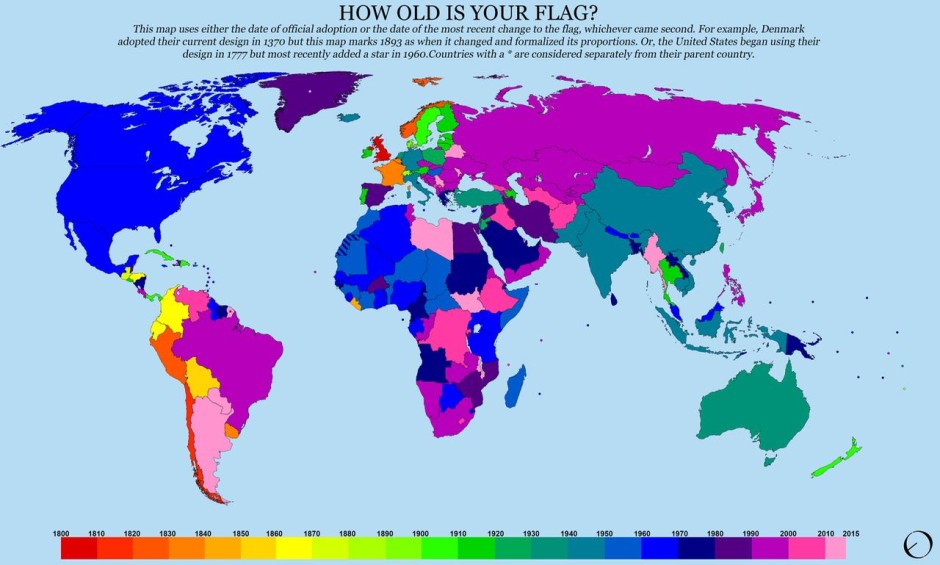 The highest point in each country

Where is English an official language?

The number of the top 200 largest cities in each country. With the locations of the cities as well. Via Reddit 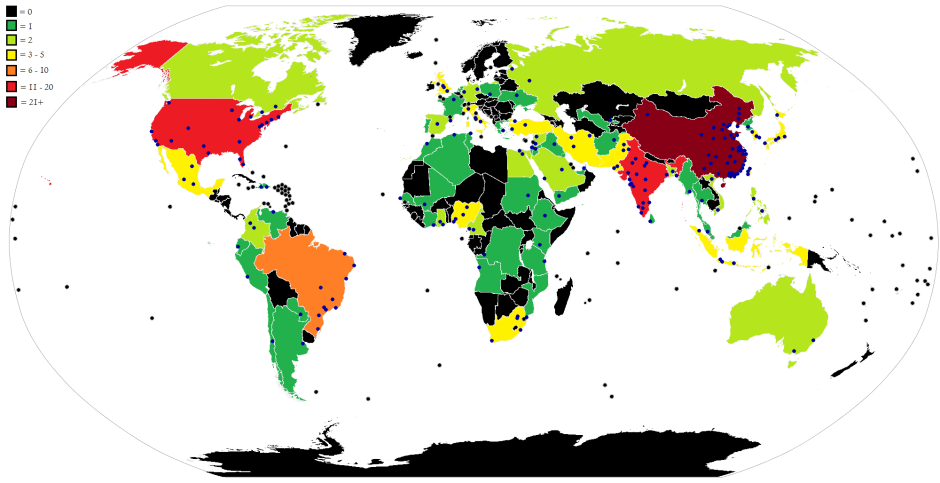 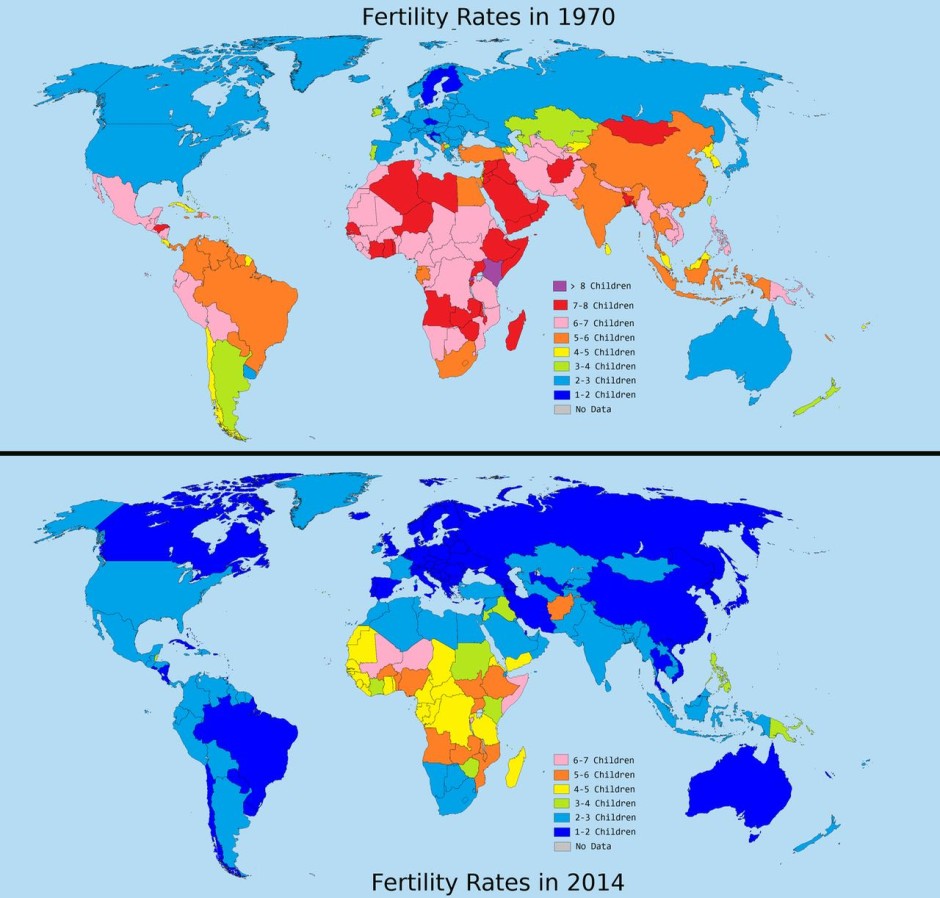 The preferred 2016 Republican nominee by state 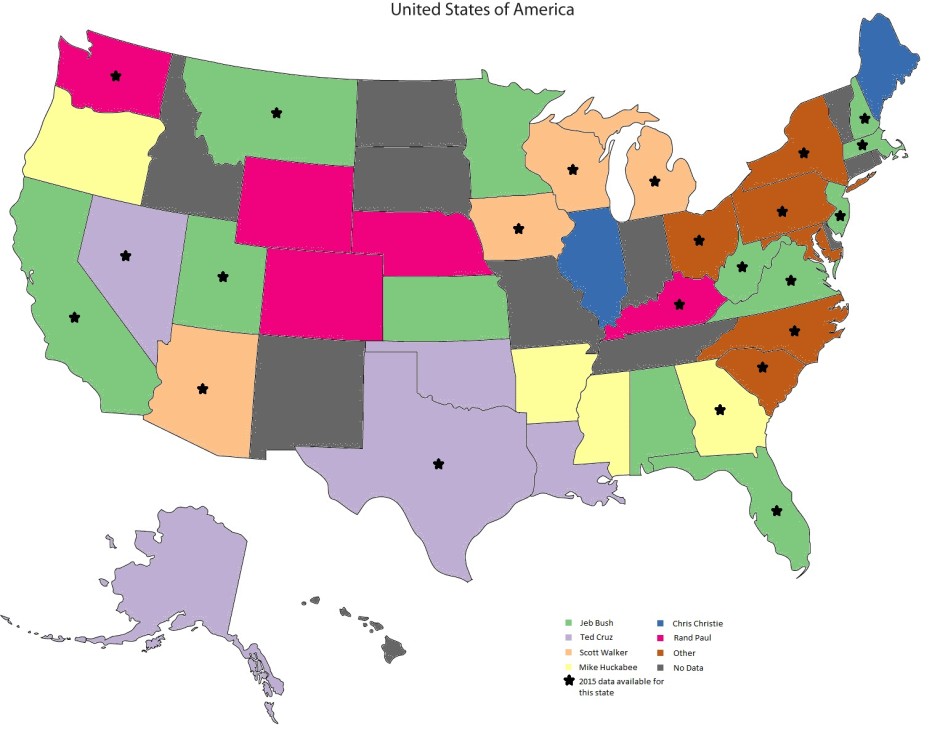 Women in jail in the U.S.

Gay rights in Africa. Of all the continents, Africa is the toughest on gay rights. Via

Worldwide debt as a percentage of GDP. The US is right up there with Greece, but that's slightly misleading, as the fundamentals of the US economy are much stronger. Via Reddit

Print Details
Previous post
Next post
3 Tips for Making Your Dream of Buying a Home Come True
If Your Home Hasn’t Sold Yet… Check the Price!