Rental Tour of America: How Many Square Feet Can You Get for $1,500?

As rents rise across the country, many are wondering if they're getting the biggest bang for their buck, not only when it comes to how pricey their space is, but how much space they're getting for the price. RentCafe recently utilized Yardi Matrix search tools to explore how much apartment you can snag for $1,500 in the 30 most populous U.S. cities. The results might make you want to pick up and move.

Memphis, Tenn. takes the cake for most space for your dollar, with the average rent landing at only $704. Oklahoma City is next at $711, with Indianapolis pulling third rank at $754. On the other end of the spectrum, the priciest metropolis is—no shocker here—New York City, with San Francisco and Boston pulling in shortly behind.

A few other big ticket takeaways? The rent per square foot in San Diego is half (yes, half) of what it is in San Francisco, and a $1,500 Manhattan studio would fit in the living room of the four bedroom, 3 bathroom home you could snatch in Memphis for the same amount of dough. 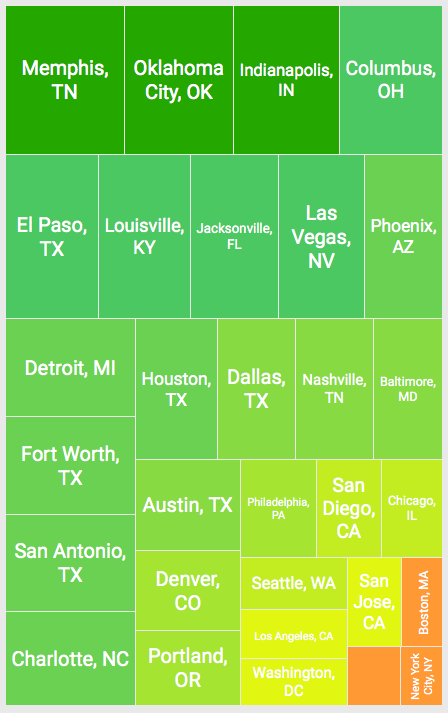