Fed’s Plans to Raise Interest Rates Are Delayed, Not Derailed - By BINYAMIN APPELBAUMMARCH 13, 2016 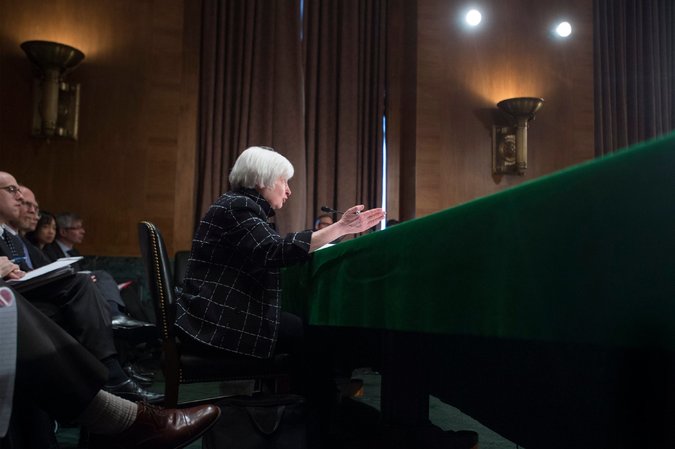 WASHINGTON — Federal Reserve officials will gather in Washington on Tuesday and Wednesday to debate whether a bumpy start to the year is now in the rearview mirror, clearing the way for higher interest rates.

The Fed is not likely to raise rates this week, but the steady growth of the domestic economy — despite the wobbles of financial markets and the weakness of other developed nations — is strengthening the hand of officials who say that higher rates are necessary to maintain control of price inflation.

It seems increasingly clear that the Fed’s plans to spend 2016 gradually raising its benchmark interest rate have been delayed, not derailed.

The challenge now confronting Janet L. Yellen, the Fed’s chairwoman, is forging a consensus among Fed officials about how soon to resume the march begun in December, when the Fed raised rates, by 0.25 percent, for the first time since the financial crisis.

Some Fed officials still emphasize caution, arguing there is little risk in moving slowly. Lael Brainard, a Fed governor, has been particularly vocal in warning that the weakness of the global economy could weigh on domestic growth.

“We should not take the strength in the U.S. labor market and consumption for granted,” Ms. Brainard said in a speech last week. “Given weak and decelerating foreign demand, it is critical to carefully protect and preserve the progress we have made here at home through prudent adjustments to the policy path.”

But other officials are antsy about inflation. Prices rose 1.7 percent in the 12 months through the end of January, according to the latest reading from the Fed’s preferred gauge. The modest uptick brings the Fed closer to its goal of 2 percent annual inflation for the first time in years.

“We may well at present be seeing the first stirrings of an increase in the inflation rate,” Stanley Fischer, the Fed’s vice chairman, said in a speech last week.

Fed officials predicted in December that they would raise the benchmark rate by about one percentage point over the course of 2016, most likely in four quarter-point increments. The Fed was widely expected to make the first of those increases this week. But when markets started gyrating, Fed officials hit the brakes, offering reassurances that they would not make any big decisions until things calmed down.

Financial conditions tightened early in the year as investors pulled back from riskier loans and demanded higher interest rates. The effect by the end of January was the equivalent of the Fed raising rates by one percentage point, according to economists at Goldman Sachs.

But the tightening has almost completely reversed. The Dow Jones industrial average, which lost 10 percent of its value during the first six weeks of the year, has rebounded and is now down just 1 percent this year. Indeed, some analysts say the Fed overreacted and should have preserved the option of a rate increase in March.

“We get that when it comes to monetary policy, concerns about market stability and global headwinds have trumped the resilience in the U.S. economy,” said Tom Porcelli, chief United States economist at RBC Capital Markets. “But even here, there has been considerable improvement.”

But analysts do not expect the Fed to surprise investors, who have written off the chances of a policy change this week. Instead, most are looking for the Fed to signal that rate increases will resume in the coming months.

The Fed’s next scheduled meetings are in April and June.

Wage growth remains slow, which some Fed officials see as evidence that employers are still finding an abundance of candidates for available jobs. Such slack in the labor market might suggest the Fed should persist in its stimulus campaign.

In a recent analysis, however, researchers at the Federal Reserve Bank of San Francisco argued that the weakness of wage growth reflected a shift in the composition of the work force as relatively high-paid baby boomers retire and companies hire younger, cheaper workers.

“Sluggish wage growth may be a poor indicator of labor market slack,” the analysis concluded. “In fact, correcting for worker composition changes, wages are consistent with a strong labor market that is drawing low-wage workers into full-time employment.”

Ms. Brainard suggested last month that the Fed might be limited in its ability to raise rates at a time when other major central banks are pressing ahead with stimulus campaigns. The divergence tends to amplify the impact of rate increases, for example by increasing the value of the dollar and restraining exports.

“Predictions that U.S. monetary policy would chart a notably divergent path have been tempered by powerful crosscurrents from abroad,” Ms. Brainard said at a conference in New York.

The European Central Bank cut its benchmark interest rate last week to zero from 0.05 percent, a largely symbolic move, and announced that it would increase its purchases of government bonds and begin to buy corporate bonds. It also announced a pair of measures to encourage bank lending: increasing the penalties on money that banks keep on deposit with the E.C.B. and, for the first time, paying banks what amounts to a small fee to make loans.

The central banks of Japan and China are also continuing to pump money.

Economists at Goldman Sachs, however, concluded in a recent analysis that the current differences among the major central banks were not “unusual or implausible” by the standards of recent decades.

If the economic fortunes of the United States continue to diverge from those of other developed nations, it is likely that the Fed’s path will diverge, too.